Alegrias rhythm is in 3/4 and 6/8, with continuously overlapping ternary and binary accents. The whole pattern has 12 beats, but it is divided into 2 groups of 6 notes. In the first group of 6, the 4th note is accented, while in the second group – the 5th note is the heavy one. 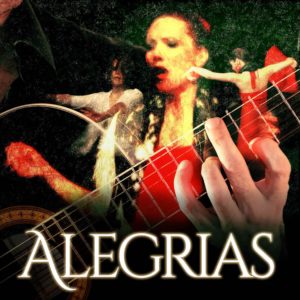 It is structurally the same to the “Bulerias” rhythm, just in a slower tempo. But slower tempo allows more dense division of time, richer in rhythmical figures. Alegrias is the most flamenco from all flamenco palos, inspiring guitarists in the second half of the 20th century to create the most elaborate pieces in flamenco. The harmonic center is the tonic-alised harmonic minor dominant chord with the minor 9th. The most used consonances are the minor tonic, the subdominant, and also from natural minor, the 7th and the 6th-degree chords. Having the most elaborated rhythmical time divisions, alegrias is also the most demanding flamenco style because of its complexity, requiring quite a high level of understanding of all flamenco guitar techniques. Playing a simple alegrias pattern with chords in 3/4 is, of course, a good start. But playing a complex alegrias falseta, or just one whole musical period – apart from understanding and feeling the rhythm, also demands an extensive knowledge of different classical and flamenco guitar techniques…

From the beginning of the 19th century in Spain, with the classical guitar coming to the world music stage and being played more and more in the elite society, the Gypsies rapidly adopted this new 6 string instrument as their own. Started populating western Europe from the Punjab province in India during the Moz-Arabs ruled Iberia in the 12th century, many of the Gypsy “guests” remained after the 15th and 16th-century Christian conquests, that started in 1492. Castilla and Toledo’s alliance expelled (almost) all Jews and Arabs, and the Gypsies. Besides that fact, the Gypsies were the ones that were the carrier and the catalyst for all right-hand techniques because they were too poor to buy metal strings, like normal citizens. They were making the strings from animal intestines and were playing the guitar without any bone pick, using the fingers and fingernails. They were now traveling nomads again just under Christian rule, and as the second order citizens, Gypsies continued to spread the spirit of freedom over the Iberian peninsula. Their nomadic freedom ideology, under years of repression – created the very essence of the Flamenco spirit and culture we have today…!
Flamenco guitar playing style came from their different approach to this newly emerged and perfected 6 string instrument. Instead of performing it plucking the strings by pulling and releasing them with the fingers (like classical guitarists, which would require a certain level of precision and fingernails hygiene); their approach to it was much cruder. They started using the whole body of the guitar as a percussion instrument, hitting the front board to create sound and playing the “golpe” hit. Therefore paving the way for the “golpe” protection plate to appear. But the most important is that they invented a whole new technique from scratch, hitting the strings with the top of the fingernails with circular repetitive motion; using as a pivot base both the wrist and the finger base joint with the anchored thumb. Therefore creating the base of the “Rasqueada”, as opposed to “Punteada” guitar, (today being the flamenco and the classical guitar).