Arpegio is one of classical and flamenco guitar techniques that can not be played with the pick or on a steel string guitar even remotely in the same way. The extremely powerful right-hand technique with properly formed nails allows us to perform very dense time measurements, all up to simultaneous quadruples. Arpegio is primarily played tirando, although the bass notes or the leading voice melody can be performed apoyando as well. It is for to accent and it makes different the melody tone color from the rest of the arpeggiated music text, played tirando. Arpegio technique on string instruments evolved together with the natural transition in music in the 18th century, from polyphony to homophony, and with the appearance of the “harmonic blocks” – chords. For the first time in history, it was possible to produce more notes on one instrument, so they superimpose nicely… 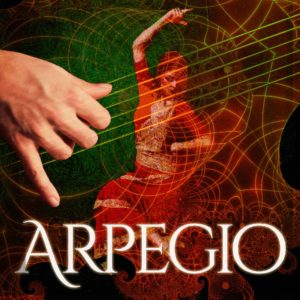 When we start perceiving the guitar as a harmonic opposed to a melodic instrument (electric guitar is a harmonic instrument, but because of it’s weak possibilities to superimpose notes, the musicians end up “thinking” like on a melodic instrument), the Arpegio is the most important technique we will ever use. The classical guitar actually started using arpegio technique sooner, because a clear arpeggiated music text appeared first in classical guitar works of Fernando Sor, in the early 1800s. Arpegio in flamenco didn’t come until the 1950’s; in fact, because flamenco was quite rudimentary all up to the 2nd World War when fascist regime made the culture turn inwards, and flamenco became the unique ethnic culture that evolves during the modern era. Actually, the flamenco guitar music started evolving and being fully respected – only when a big part of “white” population on Iberian peninsula accepted it as their national heritage. Only then it started being respected as art, regardless of the color of the skin of the artist.

For the last 200 years, both the classical and the flamenco guitar remain literally one and the same unchanged instrument. The major evolution of flamenco techniques happened in the second half of the 20th century, and the techniques are still evolving. On the other hand, the classical guitar techniques are still being strict to expand, as always, waiting for some piece to embed the technique into the classical guitar heritage. Having some amazing artists through the last 200 years enriched the world’s national heritage in giant steps, like Fernando Sor in classical guitar, and Paco De Lucia in flamenco. So today we have an enormously rich legacy for exploration. What has changed are the craftsmanship processes, and some irrelevant stuff, like the pegs mechanism or a “golpe” plate. Our problem today is the serious shortage of wood to build guitars because almost all forests with several centuries old giant trunks now are gone. But that is a whole other story…

Flamenco Guitar Lessons reveals secrets, tips, and tricks for mastering flamenco guitar, through a set of very comprehensive video tutorials on Harmony, Techniques, Styles (“Palos”) and Nails. The technically rich Iberian legacy brought every single classical guitar technique into the world of flamenco. That’s why the flamenco guitarists today are on the technical front lines, widening flamenco language and achieving the impossible. On the other hand, the strict classical guitar world, waiting for some piece to be written to embed the technique into the classical guitar heritage, is still late to adopt many fantastic flamenco techniques. Therefore Flamenco Guitar Lessons explores the most important from both worlds.
A special sample player software called Flamenco Loop Player, will enable you to effectively learn flamenco rhythm (compás) by playing along the highest quality flamenco percussion samples of: cajón (hand drum), palmas (claps), shaker, djembe, congas, bongos, maracas…and all the most used percussion instruments in flamenco. Every beat is marked with a yellow vertical line, and every group of beats to consider while counting is highlighted with green, so you can easily understand the accents seeing exactly what is where, and develop an inner feeling for the rhythm…: