Bulerias rhythm is in 3/4 and 6/8, with continuously overlapping ternary and binary accents. The whole pattern has 12 beats, but it is divided into 2 groups of 6 notes. In the first group of 6 beats, the 4th is accented, while in the second group the 5th beat is the heavy one. The repeating segment has 2 groups of 3 beats, so it behaves like any other ternary rhythm like the waltz, while the “remate” or the cadencing segment – has 3 groups of 2 beats, so it brakes the regularity of the ternary accents – apparently stepping out of the time measurement. It is not, bulerias is just accenting the second group in a different way, counting and accenting binary the second 6 beats. 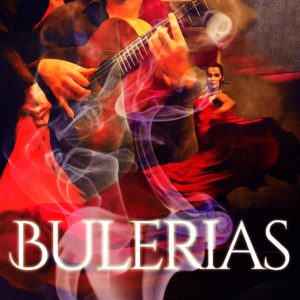 Bulerias is structurally the same to other ternary flamenco palos like “Soleares” or “Alegrias“, just in a faster tempo. The harmonic center is the “tonic-alised” harmonic minor dominant chord with the minor 9th, and the most used consonances are the minor tonic, the subdominant, and also from natural minor, the 7th and the 6th-degree chords.
Bulerias word is deriving from Latin – Burla, which means laughing out somebody or something. It is a happy flamenco palo, in fact, all flamenco forms are “Alegre” – happy. It is because of the nomadic careless lifestyle and living each day like there is no tomorrow. It has appeared without any harmonic instrument; initially, there was just percussion and human body produced sounds. The guitar is the latest addition to flamenco after the pure rhythm and singing created its essence…
The modern guitar with 6 strings and contemporary tuning with fourths and a major third, starts to appear in the second half of the 18th century, around 1780. The industrial revolution and the technical development allowed for more sophisticated instruments to develop, and that led to the appearance of the classical guitar on Iberian peninsula. The flamenco guitar came right after the classical guitar because at the very moment the Gypsies saw the classical guitar entering the high society, they started accepting it as a part of their own legacy. Once the industrial revolution distributed precision tools and standards over the planet, the more precisely crafted instruments were available for the masses, and since then – the design of the Spanish guitar didn’t change a bit. In early flamenco records, there is no guitar mentioned, they were just too poor to own one, so the flamenco techniques as well as first purely flamenco, not classical guitar will not appear until the 19th century.

From the beginning of the 19th century in Spain, with the classical guitar coming to the world music stage and being played more and more in the elite society, the Gypsies rapidly adopted this new 6 string instrument as their own. Started populating western Europe from the Punjab province in India during the Moz-Arabs ruled Iberia in the 12th century, many of the Gypsy “guests” remained after the 15th and 16th-century Christian conquests, that started in 1492. Castilla and Toledo’s alliance expelled (almost) all Jews and Arabs, and almost all the Gypsies. Besides that fact, the Gypsies were the ones that were the carrier and the catalyst for all right-hand techniques because they were too poor to buy metal strings, like normal citizens. They were making the strings from animal intestines and were playing the guitar without any bone pick, using the fingers and fingernails. They were now traveling nomads again just under Christian rule, and as the second order citizens, Gypsies continued to spread the spirit of freedom over the Iberian peninsula. Their nomadic freedom ideology, under years of repression – created the very essence of the Flamenco spirit and culture we have today…!
Bulerias playing style came from their different approach to this newly emerged and perfected 6 string instrument. Instead of performing it plucking the strings by pulling and releasing them with the fingers (like classical guitarists, which would require a certain level of precision and fingernails hygiene); their approach to it was much cruder. They started using the whole body of the guitar as a percussion instrument, hitting the front board to create sound and playing the “golpe” hit. Therefore paving the way for the “golpe” protection plate to appear. But the most important is that they invented a whole new technique from scratch, hitting the strings with the top of the fingernails with circular repetitive motion; using as a pivot base both the wrist and the finger base joint with the anchored thumb. Therefore creating the base of the “Rasqueada”, as opposed to “Punteada” guitar, (today being the flamenco and the classical guitar).

A special sample player software called Flamenco Loop Player, will enable you to effectively learn flamenco rhythm (compás) by playing along the highest quality flamenco percussion samples of: cajón (hand drum), palmas (claps), shaker, djembe, congas, bongos, maracas…and all the most used percussion instruments in flamenco. Every beat is marked with a yellow vertical line, and every group of beats to consider while counting is highlighted with green, so you can easily understand the accents seeing exactly what is where, and develop an inner feeling for the rhythm…: