FOR SUBTITLED TRANSLATION TO ANY LANGUAGE:
(click 1.) press “CC” button, down on the right side (underlined with a red line – means subtitles ON)
(click 2.) press: “a small gear” button, to the right, next to it, and then:
(click 3.) press: “Subtitles CC”, and then:
(click 4.) press: “Auto-translate” – first, and finally:
(click 5.) in the popup menu – select the desired language…

Picado is one of the first principals and the most natural ways to play both flamenco and classical guitar. Mastering it is absolutely necessary to play a proper Spanish guitar finger technique. Picado is the way to play any melody, but parts of it are also incorporated into many other playing techniques. To perform it “como el Dios manda” (like the God commands), or the way it should be played, a proper set of nails is also a must. 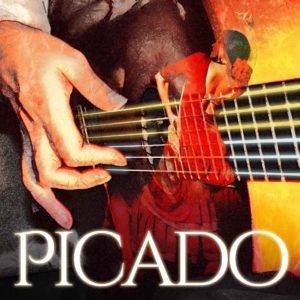 The natural right-hand position on Spanish guitar (both flamenco and classical) maintains the wrist some 10 cm away from the front board, because of the constant interchanging of the techniques; therefore making it difficult to assess the exact positions of the strings. This is especially notable when playing fast passages and scales. If the strings have lower tension, they take too long to back to the initial position. So you have to “chase them” over the guitar, which is a crazy thing to do while playing close to 10 notes per second. But the higher tension strings have other disadvantages, especially if you are a beginner. Also, the index and the medium fingers are unequal in many ways, so that disbalance for the equal picado – must be overpowered by practicing in a certain way.
The scales in flamenco are primarily played picado apoyando, and forte too. Picado can also be performed tirando, but just when a strong apoyando tone would break up the arpeggiated tirando text, and a much quieter passage is needed. Paco De Lucia achieved incredible speeds in picado, showing us that the technique is a state of mind, not the state of your muscles, or the amount you practiced. Don’t get me wrong, Paco also spent his childhood playing 14 hours per day, but many of us have, and not many have achieved it.

For the last 200 years, both the classical and the flamenco guitar remain literally one and the same unchanged instrument. The major evolution of flamenco techniques happened in the second half of the 20th century, and the techniques are still evolving. On the other hand, the classical guitar techniques are still being strict to expand, as always, waiting for some piece to embed the technique into the classical guitar heritage. Having some amazing artists through the last 200 years enriched the world’s national heritage in giant steps, like Fernando Sor in classical guitar, and Paco De Lucia in flamenco. So today we have an enormously rich legacy for exploration. What has changed are the craftsmanship processes, and some irrelevant stuff, like the pegs mechanism or a “golpe” plate. Our problem today is the serious shortage of wood to build guitars because almost all forests with several centuries old giant trunks now are gone. But that is a whole other story…

A special sample player software called Flamenco Loop Player, will enable you to effectively learn flamenco rhythm (compás) by playing along the highest quality flamenco percussion samples of: cajón (hand drum), palmas (claps), shaker, djembe, congas, bongos, maracas…and all the most used percussion instruments in flamenco. Every beat is marked with a yellow vertical line, and every group of beats to consider while counting is highlighted with green, so you can easily understand the accents seeing exactly what is where, and develop an inner feeling for the rhythm…: