Guitar nails are an essential tool for performing on a nylon strings guitar. All through the history of Spanish guitar, the guitar nails as tools were an inevitable part of the gear, so to say, but rarely mentioned by early classical guitarists, (while from early flamenco guitarists there are no records at all). First, because classical guitarists were being ashamed of having long guitar nails like women; and second, they just didn’t want to be compared with any Gypsy playing flamenco with long fingernails. The classical guitarists were considering themselves to be “elite” citizens, and there despise of flamenco lingers to this day. Although left out from records, the guitar nails were simply an inevitable asset, allowing for more variety of tone colors, and more precise dynamics.
From the pieces of Fernando Sor from the beginning of the 19th century, it is absolutely obvious that he was performing as any modern guitarist, and that had guitar nails on at least the thumb, index and the medium finger. At one point of his career he decided not to use the “annular” finger, or the ring finger, what we can also feel in his pieces and composing language. Almost a whole century later, Francisco Tárrega had gone through various stages and tried many different lengths of his guitar nails. 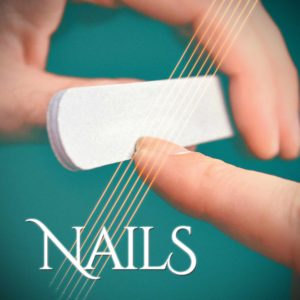 The story that he ended up cutting them off completely – simply is not true. Especially after having composed the most elaborate tremolo piece in classical guitar history, it would be ridiculous to prevent himself from performing it forever. He has just filed his nails to “zero” (which still leaves the nail some 0,8 mm “longer” than the finger), but after having long nails for decades, that is a completely different thing. I can guarantee this because I have entered the 4th decade of having long fingernails, and when I file off my nails completely, (so there is no more white nail surface) – so all the way to the flesh beneath – there is some 0,8 mm of the nail that I can not file off. It is because the flesh beneath it grew and went forward a lot to support it better. Lately, when my nail breaks and I file it off totally to the flesh – it still sticks out enough that I can still play with it, almost like nothing happened; (I don’t even notice it, as opposed to the nervous breakdowns I had earlier in my career when my nail breaks). That is what “I am filing off my fingernails completely” meant in Tarrega’s case. Like me, he was letting the nails grow up just to a maximum of 0,2 mm (the white bit, so literally nothing), and then had more than enough material to play brilliantly. In the rhythmical and the melodic elements in his pieces is also obvious that he had long guitar nails. The composer’s language is so elaborated, demanding such a variety of tone colors, that that level of expression can only be obtained with precisely formed guitar nails. After one concert, when Paco De Lucia saw how elaborated my approach to guitar nails is, he sent me to bring the lamp and the UV gel, and do the nails to him and Niño Josele. Paco’s nails were ok, but from continuous touring, Josele’s nails were totally destroyed. I remember he had the medium fingernail completely gone. So we had to mold his entire nail with the sticker, just like girls do in a manicure salon. He was happy as a puppy when he realized he can play normally again, and after Paco went to sleep, around 9 in the morning, we went from Paco’s room to Josele’s room and the two of us later stayed 5 hours playing the guitar, it was a very special “night” for me, we went to bed at 14:00 the next day.

There is practically zero information on guitar nails in the world of both classical and flamenco guitar. The material presented in the tutorials here on Flamenco Guitar Lessons website is an absolutely unique set of information recorded for the first time in history. This field is so obscure that among classical guitarists – nobody understands anything regarding the guitar nails and the tone they produce (trust me, I know them). In the world of flamenco, there is no information on guitar nails whatsoever, but since the flamenco guitarists have shorter nails, and especially because of how the world of flamenco is, they have even less chance to understand the most important things regarding the guitar nails. The “principle of two spots” is the essence of it all, and in the tutorial “Nails – The Essence” it is explained to the detail…

A special sample player software called Flamenco Loop Player will enable you to effectively learn flamenco rhythm (compás) by playing along with the highest quality flamenco percussion samples of cajón (hand drum), palmas (claps), shaker, djembe, congas, bongos, maracas…and all the most used percussion instruments in flamenco. Every beat is marked with a yellow vertical line, and every group of beats to consider while counting is highlighted with green, so you can easily understand the accents seeing exactly what is where, and develop an inner feeling for the rhythm…: