Tremolo is the most powerful and beautiful finger technique, deriving from Arpegio. Tremolo is the best way to perform any melody including both bass and harmony notes, and it is the technique that accentuates the most all the characteristics of the guitar as a harmonic instrument. As soon as the world of classical guitar started establishing itself in the early 19th century, and the right-hand techniques started evolving, guitarists saw an option to further advance, and make a big step in the realm of the right-hand technique. Playing arpegio more and more precise, they saw the opportunity to play the notes of the melody repetitively with “a”, “m” and “i” fingers, but not on different strings. Keeping the bass notes played with the thumb, and instead of arpeggiating the harmony notes over various strings, all 3 fingers were now playing the melody on just one string. The speed increased, the thumb took the role of arpeggiating the bass and harmony notes, and the whole new technique was born from scratch.
Classical guitarists adopted the most logical, and more simple version of tremolo, with a thumb playing the bass, and 3 notes/fingers playing the melody, p, a, m, i / p, a, m, i / p, a, m, i … 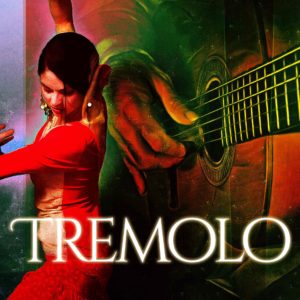 But flamenco guitarists took the matter even more serious and conceived a technique that looks like an anatomist made it. Aware of the fact that the index finger has more neural connections to the brain, flamenco technique involves with two strokes with the “i” finger, p, i, a, m, i / p, i, a, m, i, / p, i, a, m, i … It might not seem logical, but you’ll see that after holding the guitar a few decades, and after you realize that from the most relaxed state you get the most power, it really is the technique that offers the most from this “anatomically correct” way to do it. Modern flamenco tremolo compositions are a whole universe, Gerardo Nuñez reached unbelievable levels at it, (Paco was saying that he couldn’t do it either, so it feels better…)
Francisco Tarrega is one of the most important figures in the history of the classical guitar. His tremolo piece “Recuerdos De La Alhambra” is dedicated to the sorrow, that stayed to this day, because of the eviction of the Moz-Arabs from the Granada’s “architecture mountain”, Alhambra fortress. The Christian alliance from the second half of the 15th century starts from the 1470s, but the discovery of the Americas in 1492nd is considered as the true date of the “Reconquista”. This tremolo piece will set the standard in the world of classical guitar. Apart from one of the most beautiful melodies written ever, when performed flawlessly, it is often misheard as two musicians, because the classical tremolo (p, a, m, i) can be played quite fast.

A special sample player software called Flamenco Loop Player, will enable you to effectively learn flamenco rhythm (compás) by playing along the highest quality flamenco percussion samples of: cajón (hand drum), palmas (claps), shaker, djembe, congas, bongos, maracas…and all the most used percussion instruments in flamenco. Every beat is marked with a yellow vertical line, and every group of beats to consider while counting is highlighted with green, so you can easily understand the accents seeing exactly what is where, and develop an inner feeling for the rhythm…