Intervals tutorials (together with Theory and Chords) are covering much more than just the basics for flamenco and classical music and jazz theory. They are also the complete harmony for like 99,99 percent of all the world music as well. Any music with a tonal center, to be exact, that includes blues, hip-hop, trance, rock and roll, pop, house, metal, and practically every genre that appeared in the 20th century, except advanced jazz and classical music and advanced flamenco harmony… Intervals are the base for understanding the basic diatonic harmony as well as the major-minor tonal system. 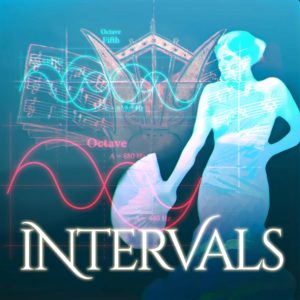 Just after understanding the intervals, we are starting from the most basic guitar chords, (that most people around the world learn to play in like a month – C major, G major, A min, D min, F major, E min, etc…), – the material presented in intervals an chords is starting to expand your understanding from the perspective of classical music harmony, but everything is shown on the guitar. Since consonances get to be much more complex, we must enter the realm of jazz or “a capella” 4 voice harmony in 2 staves, bass, and treble clef, to be able to understand the more advanced harmonic relations. So in flamenco, it is easiest to use jazz harmony, and jazz notation so, therefore, there is a PDF file of “unwritten rules” in jazz to clear any doubts on what notes might some consonance contain. The theory and the harmony presented is giving insight into pop and folk harmony for the major part of the planet. But learning intervals first is a must. It will clarify all diatonic harmonic relations, so you’d be able to pick up any song by ear because you will understand the harmony and the harmonic cycles – musical periods – you hear…

From the beginning of the 19th century in Spain, with the classical guitar coming to the world music stage and being played more and more in the elite society, the Gypsies rapidly adopted this new 6 string instrument as their own. Started populating western Europe from the Punjab province in India during the Moz-Arabs ruled Iberia in the 12th century, many of the Gypsy “guests” remained after the 15th and 16th-century Christian conquests, that started in 1492. Castilla and Toledo’s alliance expelled (almost) all Jews and Arabs, and the Gypsies. Besides that fact, the Gypsies were the ones that were the carrier and the catalyst for all right-hand techniques because they were too poor to buy metal strings, like normal citizens. They were making the strings from animal intestines and were playing the guitar without any bone pick, using the fingers and fingernails. They were now traveling nomads again just under Christian rule, and as the second order citizens, Gypsies continued to spread the spirit of freedom over the Iberian peninsula. Their nomadic freedom ideology, under years of repression – created the very essence of the Flamenco spirit and culture we have today…!
Their guitar playing style came from their different approach to this newly emerged and perfected 6 string instrument. Instead of performing it plucking the strings by pulling and releasing them with the fingers (like classical guitarists, which would require a certain level of precision and fingernails hygiene); their approach to it was much cruder. They started using the whole body of the guitar as a percussion instrument, hitting the front board to create sound and playing the “golpe” hit. Therefore paving the way for the “golpe” protection plate to appear. But the most important is that they invented a whole new technique from scratch, hitting the strings with the top of the fingernails with circular repetitive motion; using as a pivot base both the wrist and the finger base joint with the anchored thumb. Therefore creating the base of the “Rasqueada”, as opposed to “Punteada” guitar, (today being the flamenco and the classical guitar) .

A special sample player software called Flamenco Loop Player, will enable you to effectively learn flamenco rhythm (compás) by playing along the highest quality flamenco percussion samples of: cajón (hand drum), palmas (claps), shaker, djembe, congas, bongos, maracas…and all the most used percussion instruments in flamenco. Every beat is marked with a yellow vertical line, and every group of beats to consider while counting is highlighted with green, so you can easily understand the accents seeing exactly what is where, and develop an inner feeling for the rhythm…