Rasqueado technique came from the most natural and ergonomic approach to the flamenco guitar by 19th-century flamenco guitarists. In the nomadic life of the early flamenco guitarists was no room for any academic analysis. Their understanding involved just the pure natural hand movements, the levers, the force needed, the precise hand anatomy, the finger joints and tendons, the repetitive movement; or how to exploit all this in order to achieve the most with 5 fingers and 6 strings. Rasqueado is one of the results of that because you must be a forward thinker to even grasp the concept, let alone achieve a certain level at it. I am saying this, because the first guy that tried to play it, must have been a complete “utopist”. There was no chance to play it even remotely ok when he started with it, (just like when you show some advanced rasqueado technique to a novice) – but believing and knowing that he will reach to do it as a mean of expression one day…? Some “out of the box” thinking was required for that, definitely. 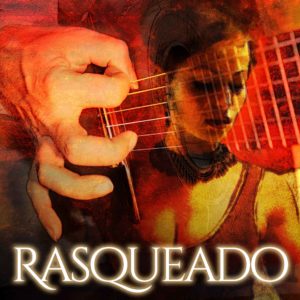 The first rasqueado technique that appeared was the wrist rasqueo. And of course, it was the “abanico”, (the hand waved fan used by women in flamenco dance) or the Wrist Triplets Rasqueado, (as I have baptized it). Since it was played over all the strings, the most logical way to apply it in music was in a music cadence, or a flamenco “remate”. The binary version of wrist rasqueo will come as a consequence of various rasqueado elements, some 100 years later.
The finger rasqueado won’t happen until the 20th century, because of the complexity of the movements. It exploits the most important principle of the technique, that you can play a strike while the hand is preparing for the next cycle of movements. In fact, that idea is the base of every continuous rasqueado, or – whenever we want to loop it indefinitely – we must “prepare the hand while making a stroke”. Anchoring the thumb allows us to direct our rasqueo scratching movement onto one or a few determined strings. But when we totally master it, we can stop anchoring the thumb and play any finger rasqueado keeping our hand and wrist in a normal position.