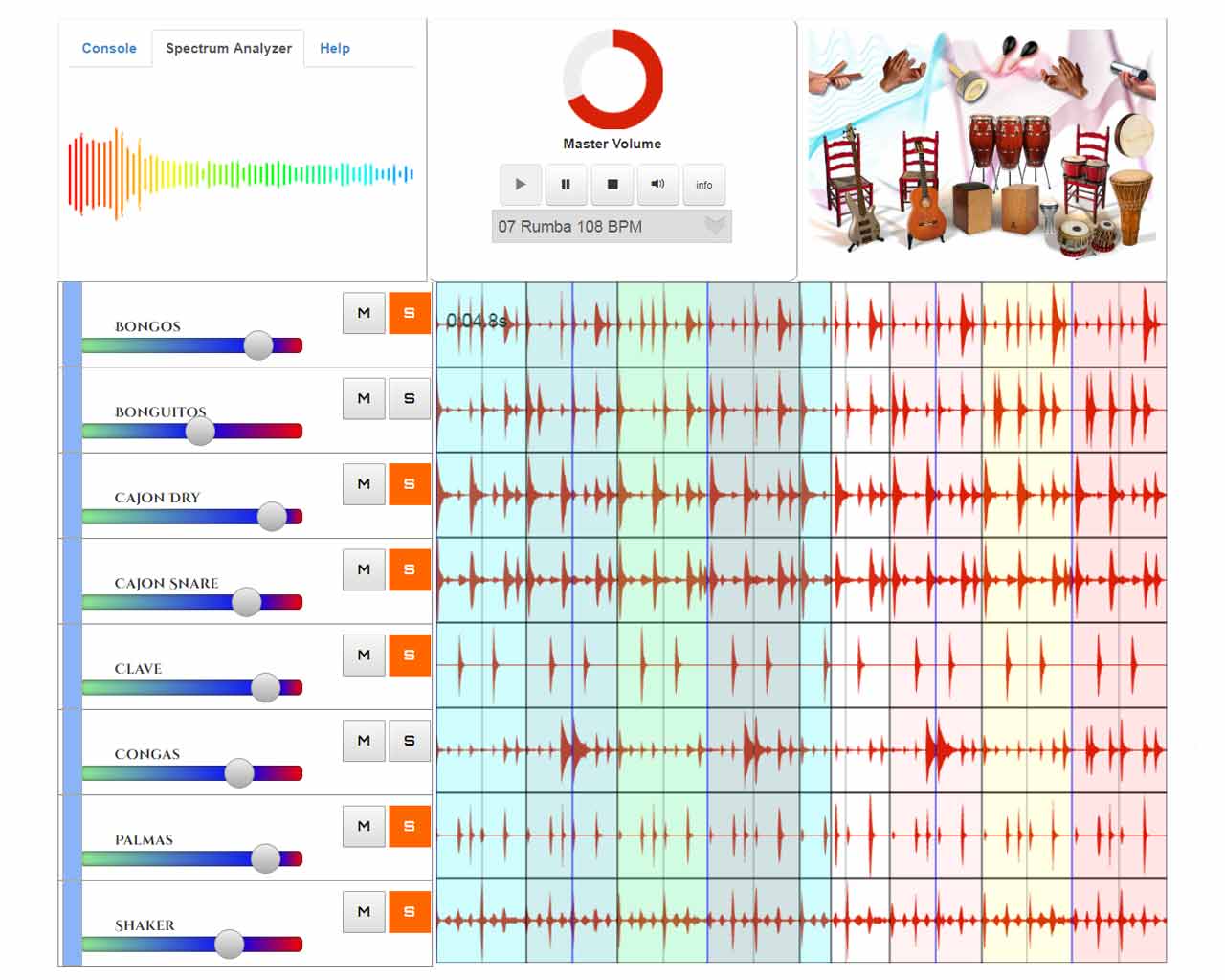 FOR SUBTITLED TRANSLATION TO ANY LANGUAGE:
(click 1.) press: “CC” button, down on the right side (underlined with a red line – means subtitles ON)
(click 2.) press: “a small gear” button, to the right, next to it, and then:
(click 3.) press: “Subtitles CC”, and then:
(click 4.) press: “Auto-translate” – first, and finally:
(click 5.) in the popup menu – select the desired language…

This software is too complex to be viewed on less than 720p resolution.
Rumba & Tangos Multi-Track Loop Player™ samples have been recorded at the highest quality – 24 bits and 48 000 Hz. Depending on the soundboard that you are using for playback – the sound may be slightly distorted on the hitpoints. It happens especially if too many tracks are playing back simultaneously, and the volume of all channels is at 100 %. (please note that on some old Android systems, there could be a delay in looped playback). Of course that the Gypsy rule: “how much money – that much music” is of big importance here. The sound quality definitely depends on your D/A device, and the quality of conversion from digital to analog sound. 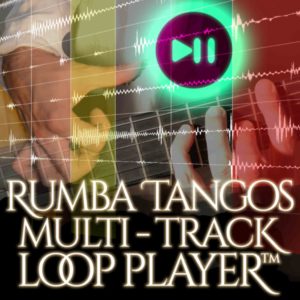 If you are using the integrated soundboard, (laptop, tablet, or desktop with soundboard integrated on the motherboard) – to improve the sound quality, you can turn down to 85% your main speaker output on the computer. Therefore, turn up the volume on your external speakers slightly.
Professional producers follow the first and most important principle when mixing songs. They start by soloing just one channel with its level to approximately 90% (to leave enough headroom for postproduction). Then they add channels one by one to the mix, by slowly raising the volume of each channel until it can be heard perfectly with the lowest volume possible.
The only “non-chromatic” or “non-tunable” percussion used in flamenco today are Palmas (handclaps), Shaker, Maracas, Cabasa, Caxixi, etc… So, all the similar “shaker type” small Latin percussion: Egg or Ice Shaker, Shekere (like a rustic Cabasa, but from a real pumpkin, with the perforated fruit seeds instead of the metal beads), etc… Cajón also has a “non-tunable” high sounds, but the bass note can often have an exact main frequency. It can impact the song harmonically, having like a bass “pedal-tone” note repeating throughout the entire arrangement. So, the major portion of the Latin percussion instruments is tuned to an exact frequency. It is always depending on the tonality of the song that’s being played.
For tuning all percussion instruments some basic tools are always needed. Or some type of a screwdriver, or some type of a wrench. So, on live performances, we can often see various sets of one and the same instrument – tuned to different pitches. They are often placed all around the musicians on the stage, (so they don’t have to re-tune them rapidly between the songs…)
The major portion of the percussion instruments in the loop sets are tuned to match the key of E minor. That’s because it is the principal guitar’s tonality. It is the best starting point to learn Rumba Flamenca on the Spanish guitar. So, our starting point is the tonicalized dominant of the E minor – the note B natural. And this percussion tuning is intended for playing “flamenco palos por medio” (flamenco styles from A(b9), (tangos patterns for example) with the capo (“la cejilla”) [sehilya] – put on the 2nd fret. Playing with the capo on the 2nd fret will also boost the most all the harmonics on the guitar you are playing. It will force your guitar to open itself “towards the light”, and boost all its harmonics not just for E minor tonality, but for all other keys as well. So,  the percussion is primarily tuned to the tonicalized dominant – B natural. The second note of choice is the dominant of the dominant – F#, and ultimately, the tonic – note E.

Cajón can also be made in such a way that it can be tuned. Neither one of these cajóns that were used was tuned to any frequency – intentionally, to avoid any harmonic dependence. But lately, cajón is often tuned to a specific frequency, by tightening the front board screws. They are pushing the front board harder onto the front edge, that has 2 different “levels”. (like “a step”, with the lower inner edge). The outer rim is protruding some 5 mm more than the inner part where the screws go. So, tightening the screws – curves up inwards the whole front board (making a parabola in the cross-section). As we go tightening, it allows us to over-tense the front board raising the main frequency; on some cajóns, we can raise it up to a 5th. So on some modern-day Cajóns, we can precisely define the bass tone frequency if we want to…

Palmas (handclaps) are the essential “instrument” in flamenco. They are divided into “sordas” and “abiertas” which translates as “deaf” and “open”. The “sordas” are produced with the whole palm surface of both hands, and the sound is deeper. While the “abiertas” is played with just 3 fingers of one hand, and the palm of the other hand, and it is a “dry” and generally louder sound. The name also depends on their rhythmical alignment. If they are hitting the first beats, the name is “primera”, and if they are playing on break-beats, the name is “contra”. The musicians that play the “palmas” are called “Los Palmeros”, and they HAVE TO PLAY SO PRECISELY and BE SO WELL EXPERIENCED, that there is like a rule in the world of flamenco. Only after approximately one half of the century – you can play “las palmas” properly..! So, “Los Palmeros” all have to be – AT LEAST OVER 60 YEARS OLD TO BE ANY GOOD in playing. So the Palmas tracks are divided into 4 channels, in the same way “Los Palmeros” naturally take roles when performing for recording: Palmas Sordas Primera, Palmas Sordas Contra, Palmas Abiertas Primera, and Palmas Abiertas Contra. THE PALMAS TRACKS ARE THE BEST POSSIBLE LEARNING EXAMPLES FOR FLAMENCO PALOS.

Bongos was recorded with the instrument membranes tuned to the best possible notes that are common for almost all consonances in the E minor tonality. So, “El Macho” (the smaller drum), with the membrane made of an X-ray sheet – gives a whole 5th note higher frequency. It’s because it is made from the thick plastic sheet instead of the original factory drum membrane. So it’s tuned to B = 246,94 Hz. While “La Hembra” (the bigger drum) with its natural skin – is exactly one octave lower than that note. It is also tuned to the note B = 123,47 Hz. So these frequencies (the note B natural) belong to the two most distant consonances in the E minor tonality at the same time. The note B is the 5th degree in the chord of the tonic, while for the dominant chord, it is the 1st. So, the 5th-degree note is the best possible note to be played as a “pedal-tone note”, (throughout the whole harmonic cycle). So, the Bongos (tuned to an octave instead to a perfect 4th) are tuned for playing in E minor – perfectly.

Congas: the TUMBA is tuned to B = 123,47 Hz, while the TUMBADORA is tuned to F# = 92,50 Hz (the Quinto and Requinto were not used). Originally the Congas had just two drums, the “tumba” and the “tumbadora”, while the “quinto” and “requinto” were added later during the 20th century. Tuned like this – to the dominant and to “the dominant of the dominant” – it is a standard tuning for Conga drums.

Shaker in flamenco is quieter than in Latin jazz. The shaker should NEVER overpower the guitar strumming in flamenco. It would take over the lead groove of the rhythm carried by guitars. So just have it @ lower volume, so that your strumming makes the groove and not the shaker. The shakers used are the Egg or Ice Shaker and the standard Latin Shaker in many forms. From the pro shakers from good manufacturers to the homemade ones, with metal buckshot pellets and tin cans, to toy plastic shakers, that had some auditive peculiarity and were recorded because of it, etc… I used literally everything that makes shaker type sound as a shaker instrument, sometimes even plastic bags squashing to imitate it, if the accents and swing are matching the certain compás of tangos or rumba flamenca.

Entre Dos Aguas loop sets – Paco De Lucia arranged this rumba flamenca just with 3 channels/instruments: rhythm and solo guitar, bass, and the only percussion he used were the Bongos. The Bongos do not interfere with the guitar’s frequency range so much as Congas, for example. So, with the Cuban Bongos “Martillo” pattern (“the hammer”) (in Entre Dos Aguas B loop set), this rumba flamenca stayed at the top of all international charts for a long time during the mid-’70s. Besides the instruments used in Entre Dos Aguas, there are also samples of Palmas, Shaker, Clave, etc. .. They will give you a much deeper perspective into the Rumba flamenca rhythm, besides the basic Entre Dos Aguas instruments arrangement, and enable you to create your own arrangement. You can mix in the instruments the way you prefer, with an audio producer’s insight into flamenco with all the creativity at your fingertips. This song was initially made when there were no computers, but Paco used lately the same software with the same algorithm for the recording that was used for the production of the sample sets. (as well as all the sound on the website)

Rumba loop sets are a bit overcrowded with samples and instruments. The fact that all these channels musically and rhythmically align and all of them can be superimposed – doesn’t mean that they all have to playback at the same time. So, better make your own groove and the sub-mix you like for practicing rumba flamenca, by soloing only the channels you want. Congas and Bongos are rarely heard simultaneously, it is normally either Bongos or Congas. Both instruments are “primary percussion” in Latin jazz music, so just one is more than enough to make a good rhythmical base for rumba flamenca. You will notice that they both demand a very similar sound spectrum range and that they “eat” each other if played back together…

Tangos loop sets are primarily based on cajón and palmas, and both Congas and Bongos are irrelevant. They are present not because they should carry the groove. These patterns can just be sometimes heard as an accompaniment in tangos, in some song’s arrangement. Feel free to mute them while studying, they are screaming E minor key, not allowing you to think in any other tonality…