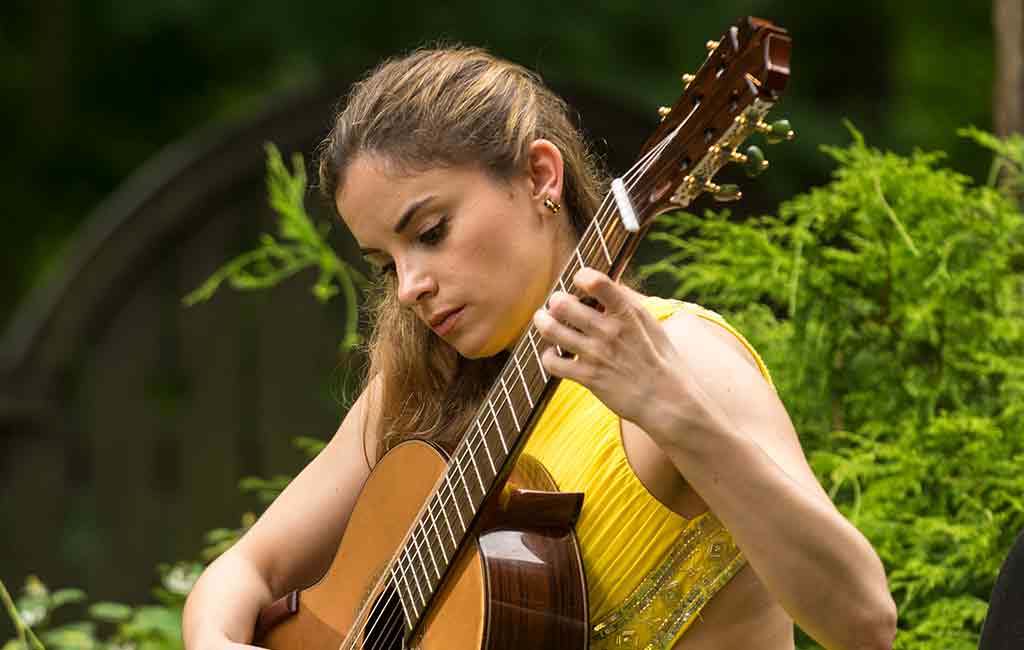 Ana Vidovic is probably one of the most beautiful classical guitarists we have. She is also one of the most talented. Observed from a school and academic level of perception, she is all A’s..! But the true artistic quality of one’s performance comes from the diversity and personal life that the musician lives. And the amount of the true-life experience that he can achieve to integrate into his performance. Just take a look at Andres Segovia‘s Interview, and see why he was an institution, and not just an artist and performer. Anyway, Ana is talented like 0.0001 % of the population, and that is an absolute fact. She is a perfect example of an extremely talented musician, but without enough real-life experience. Except when touring, she literally spent her whole life in several European conservatories. First as a student, and then today as a professor, and that can be perfectly heard in her performance. You can compare the impact of Narciso Yepes‘s performance of Recuerdos De La Alhambra, for example, and compare it with hers. Then you will see why Narciso is Narciso, and what was Tarrega really trying to say, showing grief for the loss of a whole culture, although some 200 years later, with Christian mergers.
The correct way to write Ana’s Croatian surname is Vidović. There is an apostrophe over the letter C, co it makes it like a “ch”. It’s not the same as the French “Ç”. The sound is like a “ch” sound in the word – Richard, for example. Or in Spanish “chica”, or “the little one” I don’t know her personally, but we have a mutual friend, a violinist, Igor. The two of them studied music together, and he talked about her so much, that I feel like I know her personally.
Coming from a family of musicians, Ana Vidovic started performing at a very young age, already when she was just 11 years old, as a “child prodigy”. She joined the conservatory in Zagreb at a really – too young age. Just like my ex-girlfriend Irina, that played cello, Ana Vidovic finished her secondary music education BEFORE finishing her formal secondary education in Croatia – (the general education high school). (the similar thing happen to me too, but I was 17, while Irina was 14, and Ana was just 13) So, not to lose and spend any whole years not studying music, and because she passed all the exams for music high school in the meantime – she passed the entrance exam and joined the conservatory in Zagreb, Croatia, at the age of 13, (instead of normal age, being 19). She hasn’t even finished primary education prior to joining the conservatory. That often becomes a big issue for all the music students who are talented over average. It is because they later don’t finish the very needed hi-school in 99% of the cases, being so intensively concentrated on their music studies.

Please don’t get me wrong…!!! I am not speaking from the perspective of any frustrated and “unaccomplished” classical guitarist…! I am speaking from my own personal experience. I happen to have quite a few friends in conservatories that remind me of Ana Vidovic’s life experience. They spent literally their whole lives in some different conservatories! Later ALMOST ALL OF THEM – TERRIBLY LACK A GENERAL EDUCATION, but before everything – a real-life experience, and wideness of perception of life itself. That is, unfortunately, happening to almost all talented children in classical music education. The fact that they later literally BEG the hi-school professors to give them the diploma, (to be able to apply for the university diploma after finishing music university), is the least of their problems. Their lack of education becomes extremely obvious at the time of performance. For virtuous master playing at zen level – THE MOST IMPORTANT THING IS NOT JUST BEING EXTREMELY WIDE EDUCATED, (which is an absolute must), BUT – HAVING A BROAD PERCEPTION OF LIFE, AND FINALLY – HAVING WHAT TO SAY – AND THEN ALSO – SPEAK ABOUT IT “THROUGH YOUR PLAYING” TO YOUR AUDIENCE…!
To properly play some classical guitar music piece, first, you must perfectly know the time period in the cultural sense. Second, you must understand the complex social relations in that particular Epoque, and understand for what purpose, and social class of population the piece you are playing was written in the first place. Third – you must not just know well the period historically! But also – you must understand the harmonic ornaments, that are dependent on what period of music we are taking into consideration. Fourth, you must get to know the technical level of produced instruments that was achieved at the time, allowing for those specific melody ornaments to develop in the first place…
The guitar performance is a subject with so many aspects, that the whole world can be written about it. But the very performance can be beautiful in so many ways, and the beauty is a general, relative, and VERY WIDE term. Ana Vidovic is a great example of it. But if you want to influence the planet with your art – what is essential is that you have a set of balls, preferably reaching the floor. 🙂 The audience will feel it – perfectly. In fact, when listening to you play – the audience is enjoying immersed in exactly the same emotion you are (at that particular moment). They are feeling your pain and happiness, directly through you, WE ARE JUST THE MEDIUM BETWEEN THEM AND THE “GOD” or however you want to call it, “the nature’s beauty of perception”, whatever..!
How much life in you there is – that much music will come out and be heard in the form of a sound, as a result of your interaction with your instrument.
And in the audience – EVERYBODY FEELS EVERYTHING. Period.
(let me say a few words on that subject too…)
Of course, our built-up harmonic conscience determines the level of harmonic complexity our ear can perceive, and that it will directly set the threshold for the harmonic complexity of the music that we can enjoy, or perceive as “meaningful”, and not “noise”. (there is no sense of playing Mozart to the tribe man in Africa, there will be no effect on them since their “harmonic conscience ” is not been gradually growing through their childhood, so the different harmonic changes we use to express happiness or sorrow – mean nothing to them…) But EVEN THE MOST UNEXPERIENCED LISTENERS WILL FEEL YOUR ENERGY – PERFECTLY. When you get up on the stage and face the people – NOTHING CAN HIDE your inner self! And fortunately – no conservatory and no diploma can cover for, and plug any hole “in your humanity” if you have it.