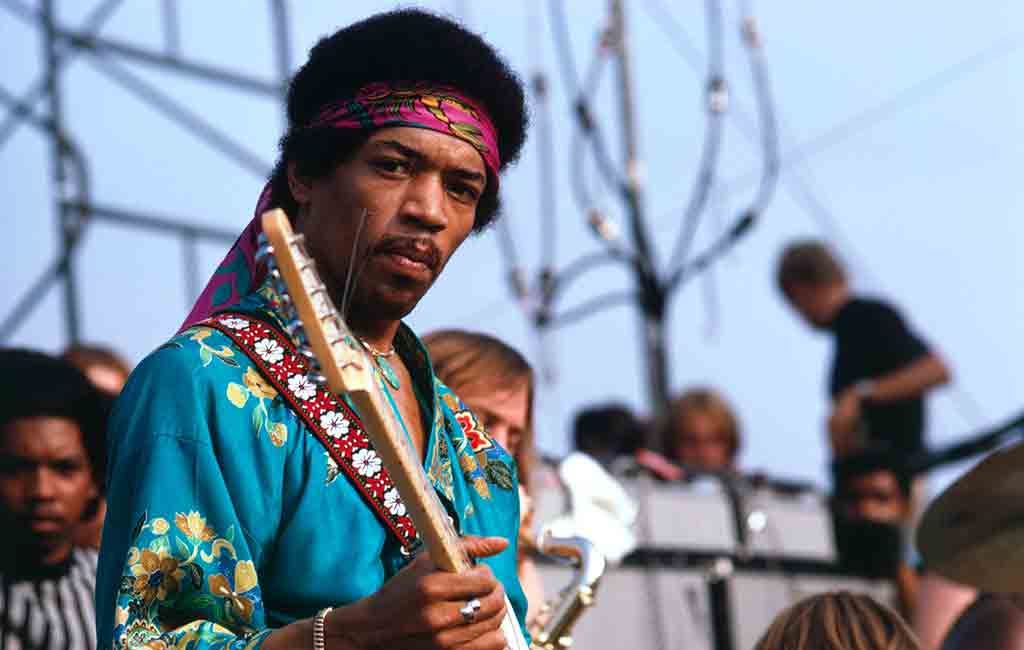 Jimi Hendrix is an unavoidable figure when we mention rock and roll. He brought a new “roll” into rock n’ roll, but not because of the marijuana joint in his mouth. His playing was so innovative for the times. He literally invented distortion and over-drive type sound. There was an anecdote with Jimi Hendrix from the studio during a  recording session. One producer came out after many hours, saying: “Man, I can’t kill this distortion, however hard I’m trying and trying”…?!? Amazing, he witnessed the history in the making but he was “in the way” of making it…?!? Playing the violin as a kid, and being a leftie, made Jimi was having to face several “problems” when the guitar setup is in question. Putting the strings “upside down” on the electric Stratocaster guitar is just not solving the problem for left-handed guitarists.
The Fender brand was Jimi Hendrix’s favorite, throughout his whole career. The sound of the electric guitar was still in the making, while Jimi Hendrix was one of the most influential figures in that field in the music of the 60’es and the 70’ies… The basic overdrive (when you turn up the input as much as you can, and then you have to lower the output on the amplifier) was his choice of sound – always..! And further from it, many more different types of sounds developed. That was the time when guitar pedals started to appear, as well. Scream Distortion is just one of the dozens of examples of guitar pedals that came into existence after Jimi Hendrix released his albums.
Of course, we can not forget the Wah-Wah guitar pedal, and the mark it left on music in that period. Some of the guitar themes have the Wah-Wah sound as an inevitable part of the music theme. The “wah” oscillations are “lo cut” effect through time. It is controlled by the speed of the foot stepping on the large pedal surface. “Cry Baby” is the most famous brand among all wah guitar pedals. Wah pedal “plays” sound also when the foot is going up, not just when it goes down. It is usually used in the exact rhythm, so the “wah-wah” effect on the notes is matching the exact beat of the song… Jimi Hendrix set the new standards in his “baroque rich expression” of his specific wah-wah pedal use of sound.
Segregation issues in America at the time, the social conditions in the black community, and the overall status of the black people… All that facts are woven into the Hendrix’s art, and improvisation. His improvisation is maybe what separates him from all other rock n’ roll musicians of the era. He improvised like a jazz musician, 5 times more than the norm in rock…Unfortunately, just like many famous artists, he died of a heroin overdose when he was just 27 years old. That number is somehow a turning point in everyone’s career. It seems that if you pass the 27, you will have a long and prolific career life. I won’t mention them here, but there are over 20 very influential and very famous musicians that reached this age and somehow died. It was predominantly the drug overdose… Believe it or not, this number is somehow cursed (I am not superstitious at all – this is just an extremely cruel statistical fact…)