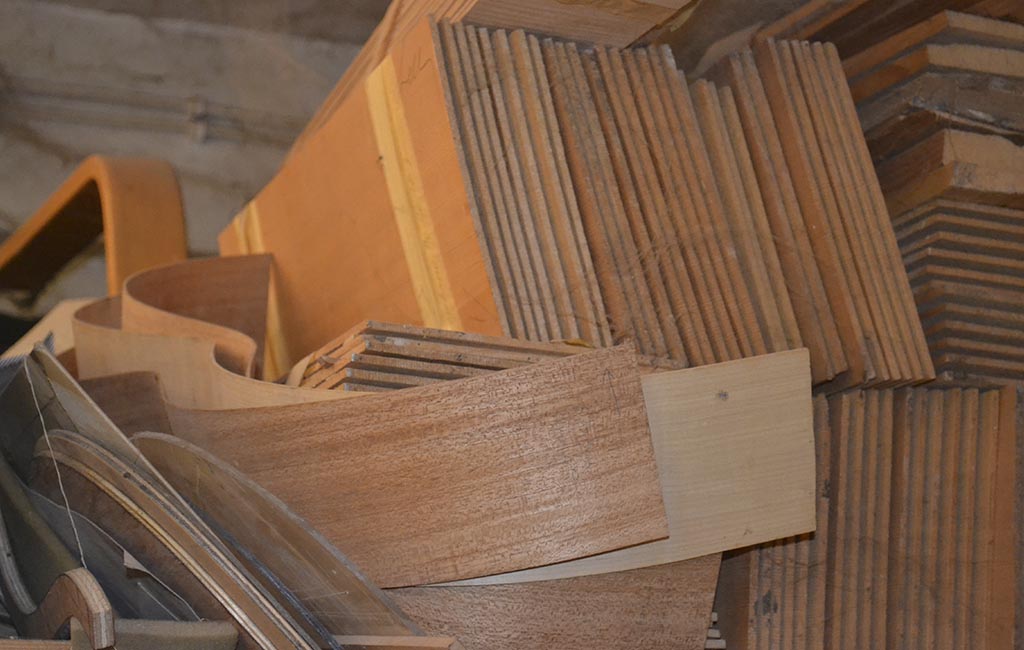 Of course, the most important thing on the guitar is the quality of the wood itself. On both classical and the flamenco guitar, the front board is always made from some soft wood, that flexes easily, like spruce, maple or cedar. Not that it has to flex, but it has to resonate as well. The resonance of the material depends on its crystalline structure, and the regularity of the wood grain, to transfer kinetic energy better. The wood itself has no crystalline structure, but it has the wood grain, and the equal fibers in it work very similar to a crystal grill.
Here we come to the most important point of this subject, the wood for the front board has to have been dried for at least 30 years – naturally..! The slower the drying process is, the bigger are the empty spaces inside the wood structure “tubes”. Any acceleration of this process would leave chunks of dried sugars inside these spaces in the wood grain, and that would kill the resonance (imagine toilet paper chunks stuck into pipe organ tubes). And where on Earth are you going to find the half a century old wood, that’s been dried properly? All the European rain forests were almost entirely cut down until 1935, there are only a few places in Germany, France, and Switzerland left, and it’s next to impossible to get it today. Lately, when several hundred years old trees are cut, they make an auction, and the highest bid gets it. The part of the trunk used for musical instruments – is only from 1 to 4 meters of the tree’s height. 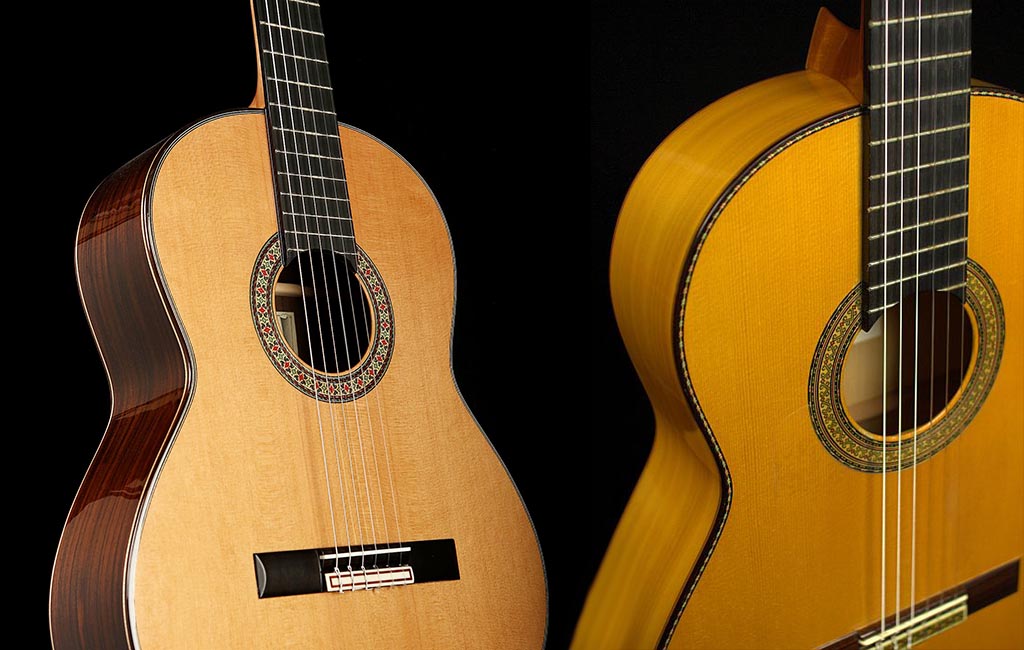 It’s quite a long story, and as Lazarus is used to saying: “You can easily find a good “guitarrero” (guitar maker) today, but the quality of your instrument exclusively depends on how much he loves you, and what wood is he going to use…” The stacked spruce wood on the top photo – has been dried naturally for 50 years, and it comes from Carpathian mountain forests in Romania. The prehistoric trees were cut down in the 1950s, under Ceausescu’s dictatorship, and were intended for front boards for the musical instruments. This is an absolutely unique stock of ready-made spruce wood boards for instruments in the world, and it’s around a half of a million EUROS worth. 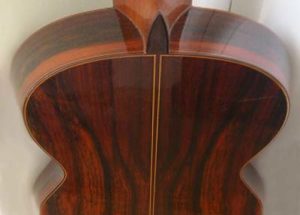 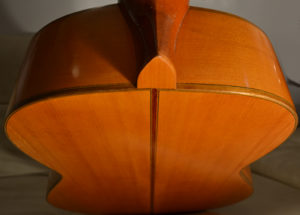 On the flamenco guitars – the back side resonates as well, and the sharpness of the tone, and that specific “punch” that flamenco guitar has – is gained with that responsive backside. Of course, the best option is the Cypress wood from the Cupressaceae genus, and there are many varieties of it from all over the planet. Until recently, there was a lot of South American cypress, my guitar (on the right) is made from it. But that stock is now gone, and the majority of the world “guitarreros” reached for other sources, from around the world. Spanish Cypress wood, believe it or not – is currently the preferred wood for the sides and the backs for flamenco guitars, although it looks like some dirty cypress from South America. It has some gray stains along the wood grain lines, but the acoustic properties came before the appearance, so today it can be seen on the majority of the best handmade flamenco guitars… 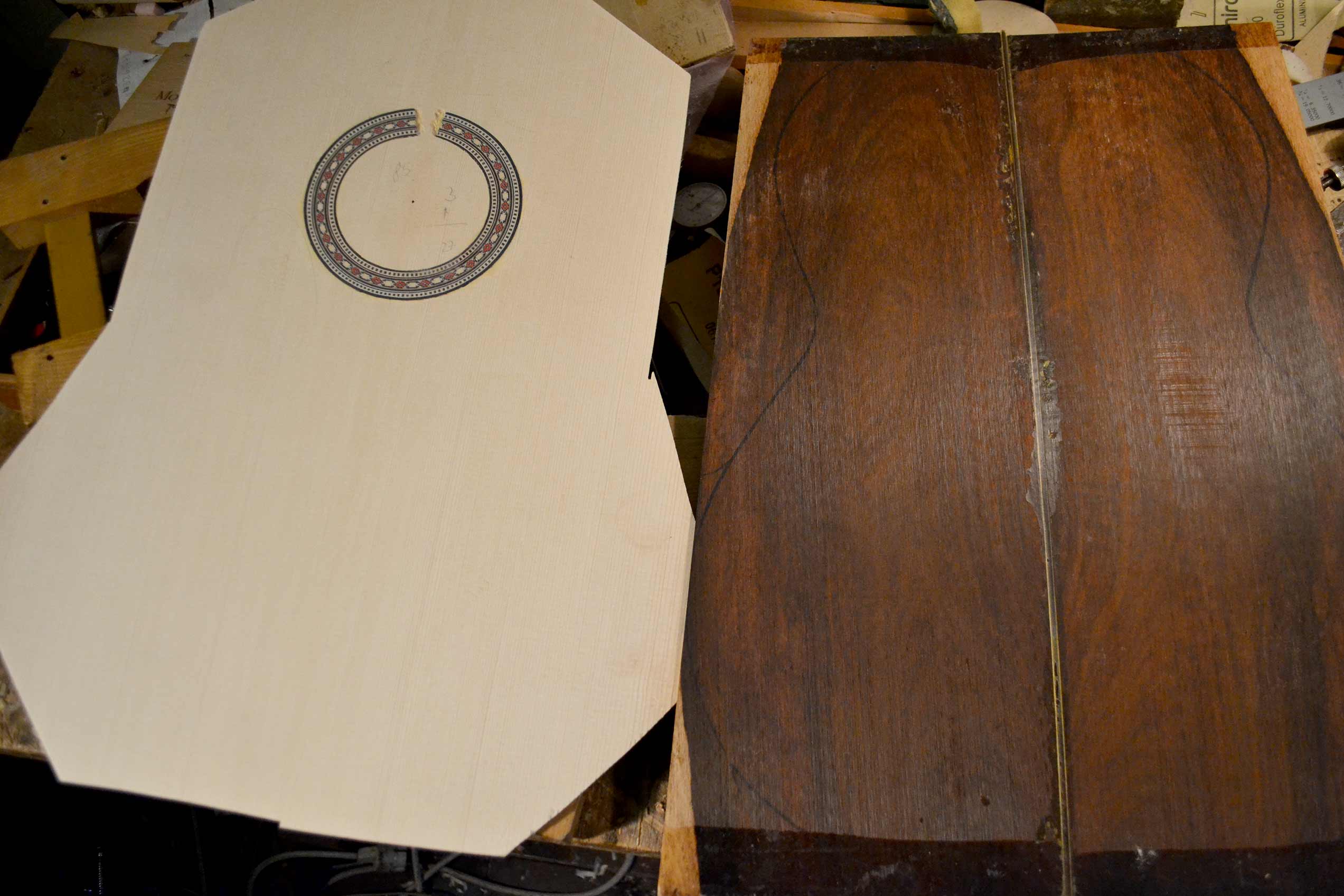 On the left – a priceless semi-finished spruce front board for any guitar, flamenco or classical. On the right – a nowadays common Brazilian Rosewood semi-finished backside, not as dense as Palo Santo for classical, but not as light as Cypress wood for flamenco guitar. This Sabre Guitar will be a classical guitar but with flamenco guitar properties – another masterpiece. I can’t wait for it to be finished, so I can try it out…